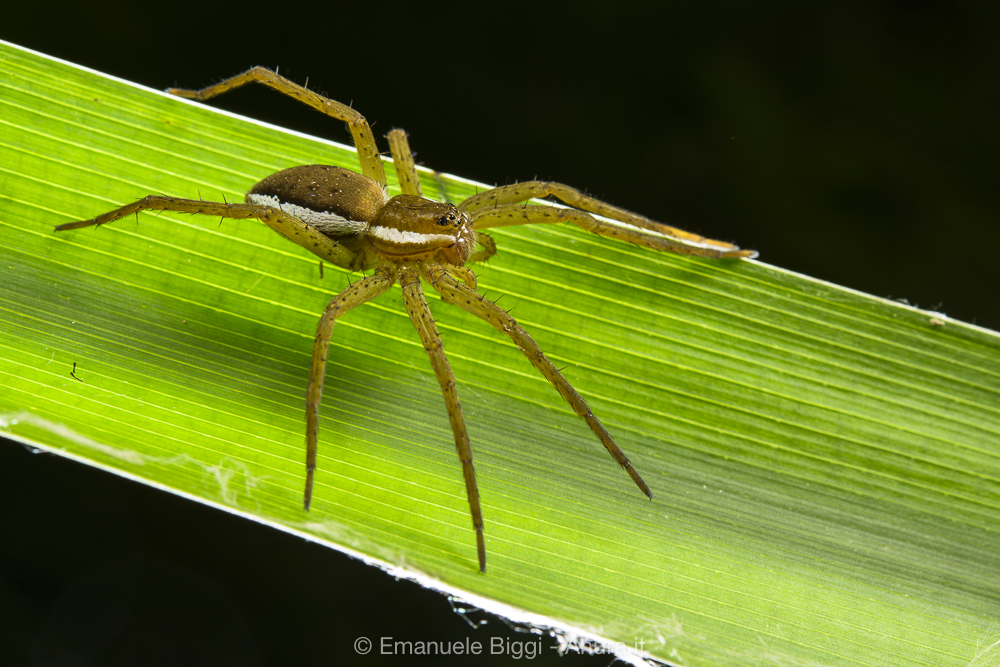 This story aims to share the knowledge about this less known species of spider, that is listed as Vulnerable by IUCN RedList.

The Great or Fen Raft spider Dolomedes plantarius has a very rare niche among spiders, being able to hunt both on land and into water. It’s bond to larger water bodies compared to the other European species, Dolomedes fimbriatus and during all stages it lives close to water. The two species are very similar, although minor morphological differences can be seen occasionally. DNA and habitat preference of young are the main factors to accurately identify one species from the other. For this reason, the present IUCN status is VULNERABLE, but it  soon could be updated, cause this species could be far less common than once thought by watching the morphological cues. The great raft spider is menaced by the loss of habitat and pollution and it cannot survive in smaller, ephemeral ponds like the sibling species can. In UK, it’s listed as endangered and there’s a conservation project to save it.

These spiders primarily feed on water invertebrates, but they often catch tadpoles and fishes, as well as other water-related spiders like the wolf-spiders Pardosa and Pirata.

To fish underwater it places its legs on the surface, waiting to feel the vibrations of a passing prey. Once it happens, it suddenly dives and grabs the prey with its venomous fangs.
In Spring the mated females make an eggsac which they carry around and protect against other predators and pathogens. Just before hatching they build a nursery web in the middle of which they place the eggsac. Here the spiderlings will stay for a while before doing one more molt and exit to begin their new solitary life.

These images were all shot in Northern Italy, inside a very old Po river dead branch which holds on among cultivated fields, roads and industries. A small pocket of life and biodiversity in the middle of monotony and human presence.

I wanted to see and photograph this spider into its hunting grounds, both over and under the water, so I also snorkeled with an underwater camera housing to get some shots of this beautiful and unique species in every way I could. In the future, I’d like to complete this work with more research/conservation images, probably going to UK and collaborating with the Turin University (Italy) researchers lead by Doct. Marco Isaia, who are working hard to assess the present status of this species and give it a future on this planet.

The desert and the sea: the Paracas desert