There are moments and experiences that just stay there, in your mind, forever. And they come up when you’re doubtful of the future, about what you’ve done of your life. They come to mind also during lighter and happier moments, as when you remember them together with the people that were there with you. The Giant Alpine spider Vesubia jugorum is the keeper-species of one of those experiences.

I was already at University, around my second year if I’m not wrong, and my passion for spiders was already firing high in my heart, together with the one about Amphibians and Reptiles.
One day, I don’t remember how, I stumped upon a paper talking about this strange wolf spider, living in the Western part of the Alps and only above 2000 m altitude.
By digging more and more on scientific papers, I discovered that it was described by Simon 1881 and nothing else until the 60’s, when Prof. Paolo Tongiorgi and some colleagues conducted more research about this spider, together with some new drawings of this animal. The color was dark, the size big, almost like a Tarantola (Lycosa tarantula) and my heart bumped.
Short was the time from that to my first contact to Paolo Tongiorgi, who’s now a big friend, and he was so kind to tell me where and how to go find the Giant Alpine spiders.
As soon as I spoke about it to my good friends Francesco Tomasinelli and Matteo Dei, the plan was set: the “Quest for Vesubia” was on.

We soon headed to the Alps and, in the end, found the spiders after a very long hike with a super heavy backpack on our shoulders, full of cameras, flashes and films. It was around 2003, so still no digital cameras there for professional things, just our beloved Fuji Velvia 50 ISO.
That was a expedition… just three days, but full of what it has then become the reason of traveling to me: documenting the small and unknown people of the (under)ground.

This year, after almost 13 years without meeting a Vesubia I decided to go there once again, to take some more shots (this time on digital) and meet and greet my old good eight-legged friends.
I also had the possibility to visit a new site to me for this images and this was even more interesting, cause the more places you visit when searching for a species, the more you’ll know about its lifestyle and needs.

After a long hike I finally reached the “hunting grounds” of the dark wolf spider and the quest began. During the day is much more difficult to find these spiders, but I eventually found the first amazing adult female. And she wasn’t alone! She was a mother with all her spiderlings clinging on her back for protection. Stopped by that sight a thought came to me: thanks for the gift Miss. Nature!

That day passed, the night came and time was coming for me to get back to my car. But you know, night is spider’s thing and Vesubia jugorum  is no exception. Just a few minutes after the first stars appeared on the sky more stars began to show among rocks illuminated by my torch. The eyes of wolf spiders reflect torch lights, and get visible from distance (even more than 30 m!) as tiny brilliant twin stars. That show was the cherry on my personal cake.

That night will be another one of those moments, I’ll keep it for my worst and best moments, to remind me how beautiful and complete a man’s life can be if passions can be fulfilled.

At night it’s also possible to witness some behaviour, like this sub-adult individual V. jugorum eating another one of the same species

Adult female with spiderling as found into her burrow under a stone. After some shots the stone was put back in place and the spider retired there. 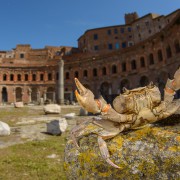 the gladiator crab is battling! 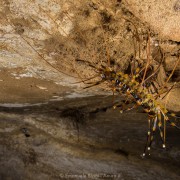 New armor for the night's knights 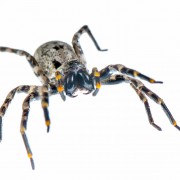 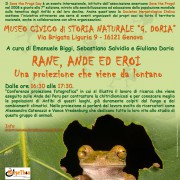 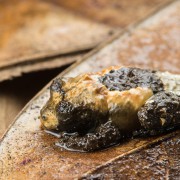 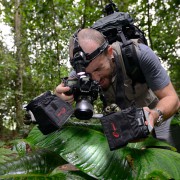