You are here: Home / Libri/Books / A forest’s tale: the spider and the frog 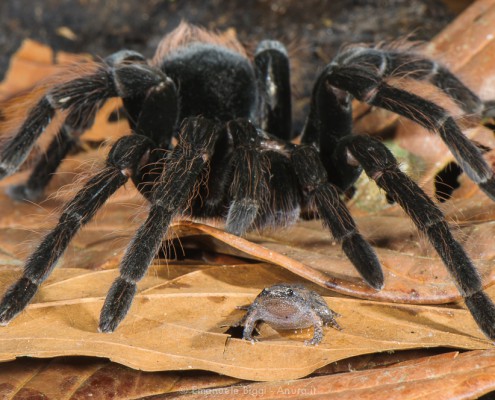 Many thanks to Rudolph Von May, Prof. Alessandro Catenazzi, Prof. Maureen Donnelly, Nigel pitman and Renata Leite Pitman, and all the crew of the CICRA Los Amigos biological station in the Peruvian Amazon, Rick West for the identification information about the spider

A forest’s tale: the spider and the frog

An Amphibian and an Arachnid live together in few square inches. An amazing symbiotic relationship from the Peruvian lowland rainforest.

By Emanuele Biggi and Francesco Tomasinelli

Frogs have difficult lives in South American rainforests. Many of them are preyed by Snakes and by Artropods, especially by spiders that are big and particularly active at night. But there is a frog that developed a peculiar relationship with some spiders. This is the Microhylid Chiasmocleis royi, who lives, often in good numbers, near and inside spider burrows of some tarantulas species. The spider, a still undescribed Theraphosidae of the genus Pamphobeteus, tolerates the frog and never attacks it. Other amphibians passing outside its burrow are immediately captured, even by the young specimens which, in this species, remain with the mother for many months with no sign of cannibalism. This curious relationship is one of the few cases of symbiosis (maybe a mutualism) between amphibians and spiders, for the first time photographed with such detail in South America.
The advantages for the Chiasmocleis are obvious. It won’t be attacked by other spiders and by small snakes: intrusions are not tolerated in the tarantula territory. And it’s possible the Arachnid is somehow helped by the frog, which preys upon small parasites (mainly Dipteran larvae) and possibly ants that could harm the spider or its spawn. 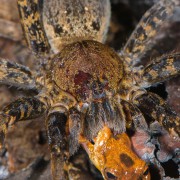 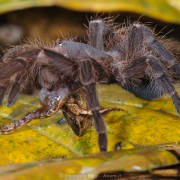 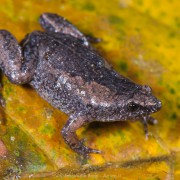 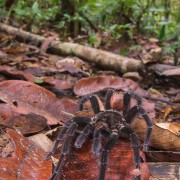 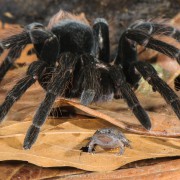 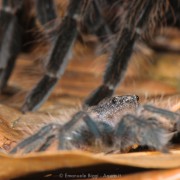 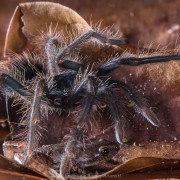 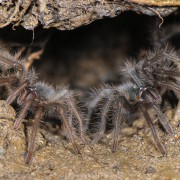 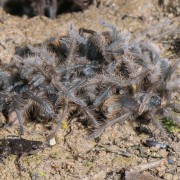 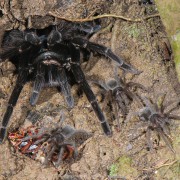 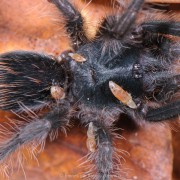